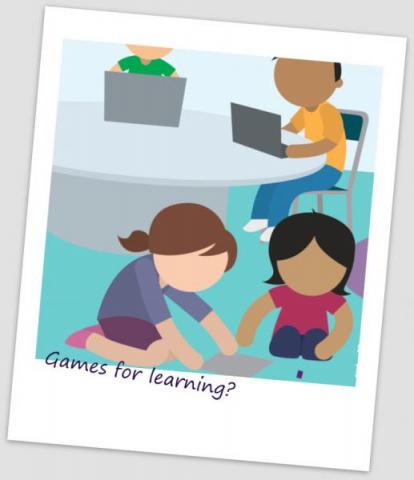 Today NZCER released a report called Digital technologies for learning which presents some findings from the  2016 NZCER national survey of primary and intermediate schools.

Thinking about the new report got me thinking back to the blogpost I wrote last year called “games OR learning?”.  At the time, I was pondering over some of the data we’d seen coming through in NZCER’s 2015 national survey of secondary schools. In particular, I was interested - though not surprised - to see that digital games and simulations were not one of the more common ways students were using digital technologies for learning in secondary school classrooms, according to teachers.

I also shared a few of the surveyed teachers’ comments about using digital technologies in the classroom which suggested that games (along with social media) might be seen by some teachers as “time-wasters”, “distractions”, something students do when they are going “off-task”.  It's important to note, however,  that the national survey didn’t really set out to probe secondary teachers’ views on games and simulations per se. The negative comments about games were just a handful in response to the question "Do you have any comments about your experiences with digital technology for learning?". The frustration in some of these comments was palpable.

Students know how to use digital technology for games – not so good at using it as a learning tool.

Students playing games instead of doing their work is a major issue.

On the other hand, we also asked secondary  teachers how often students in their classrooms used digital technologies to play games and simulations as part of their learning, and 30% of them indicated that this happened in their classrooms at least some of the time (8% "often", 22% "sometimes").

How often do your students use digital technology to do the following things as part of their school work? (Secondary teachers' responses, 2015, n=1777)

We also know that negative views about games and gaming, and scepticism about their contribution to learning, continue to be an issue in schools, and can even make game-using teachers feel a bit nervous about sharing their practices.

One year on, we’ve now got some new national survey data, this time from the 2016 national survey of primary and intermediate schools. I’m sure you've all been waiting patiently to find out  how often Year 1-8 teachers say their students use digital games and simulations for learning!

This week I'll be blogging about some of survey's findings with respect to digital games, as well as coding and programming, and makerspaces. Stay tuned!