Failure is an Option. Unless you are a school 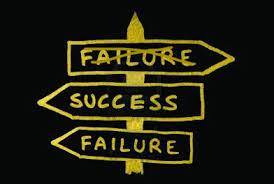 When people want to emphasise how important it is to succeed, or to get something right, they say “Failure is not an option”. Avoiding failure seems like a good idea because it’s so often a horrible experience - for us and sometimes also for anyone depending on our success. But in some fields of work, and in certain situations, failure actually is an option.

I did some simple “failure” and “mistakes” searches on Amazon’s book listings. There are tens of thousands of books about failure and mistakes. What’s within each category is revealing. We can trace an interesting story about how failure and mistakes are talked about.

There is a considerable amount written about learning from failure in the self-help and psychological literature. Many of these books are concerned with habits of failure and personal traits that seem to attract or create failure. These books have titles like Too Nice For Your Own Good: How to Stop Making Self-Sabotaging Mistakes and Why Can’t I Get What I Want? How to Stop Making the Same Old Mistakes and Start Living a Life You Can Love. Perfectionism is a recurring theme as with books such as When Perfect Isn’t Good Enough. Many of these books focus on fear of failure and coping patterns in life that have become self-limiting. They are about changing yourself to overcome failure and mistakes.

There is another section of books in the cognitive science realm. These try to explain failure and mistakes in terms of how our brains process environmental stimulae. Books titles include Inevitable Illusions: How Mistakes of Reason Rule Our Minds and The Logic of Failure:
Recognising and Avoiding Error in Complex Situations. I enjoyed the somewhat oxymoronic title, Doing It Right First Time: A Short Guide to Learning From Your Most Memorable Errors, Mistakes, and Blunders.

The largest group of books – by some considerable margin – is about failure in the business world. These focus not only on how failure can be turned into success, but on how failure is in fact the seed of success. Books have titles like Failing Upwards and Brilliant Mistakes: Finding Success on the Far Side of Failure. Success goes hand in hand with failure here. Success is achievable because of failure – and, by implication, because of learning.

These books position failure as the route to success and challenge the idea that failure is opposite to success. Some books encourage people to look deeper into failures in order to find great success - The Innovation Paradox: The Success of Failure, the Failure of Success and Celebrating Failure: The Power of Taking Risks, Making Mistakes and Thinking Big.

This standpoint is closely related to the narratives about accidental or mistake-driven discoveries and inventions. There are many well-known examples in the physical, technological, and medical sciences, as well as in business. For example, there is the quote attributed to Thomas Edison about the discovery of the light bulb being based in 10,000 previous failed attempts. Another is the surprise emergence of the drug Viagra as a treatment for erectile dyfunction from its failed development as a treatment for heart conditions. Another is the invention of Post-It Notes which were originally based on testing for the creation of an adhesive product.

When it comes to education, a different story emerges.

There is a sizeable amount written on “school failure”. There are analyses of how schools fail to serve all students well and how they fail to realise the various purposes of schooling. They account for the (often competing) ambitions in what schools set out to do, the inadequate resources they have to do it with, and the complexity of the schooling environment. There is also plenty written about student failure in schools due to learning diabilities or poverty. Things are stacked against success for certain students. In this country and others over recent decades, the debate has shifted to include talking about how schools fail (certain) students, as well as how students fail in school. Although these are different things, they are generally now recognised as interdependent. Many books in this area offer up plans to change how schools work so they stop failing students.

These sorts of books are closely connected to the sizeable literature on “school improvement” and “school effectiveness” which range right across liberal left and liberal right (conservative) political standpoints. So some books take the angle that schools must do better and here’s how to do that. Others are at pains to defend schools and point out that they can’t reasonably be held responsible for all of society’s concerns. You can’t treat poverty with pedagogy.

The formal education system is inherently political and quite a few books are critiques at the level of the system – for example Left Behind: Urban High Schools and the Failure of Market Reform and When Schools Compete: A Cautionary Tale. Cathy Wylie’s well-received book, Vital Connections: Why We Need More Than Self-Managing Schools, provides a blueprint for this country’s schools in reinterpreting how to behave as institutions. www.nzcer.org.nz/nzcerpress/vital-connections

By and large, failure in relation to school is the source of much angst. Of course it is. Many would regard schools as (potential) change agents for society. Yet schools don’t live up to this in so many ways. Instead damaging and sometimes long-term effects are visited on young people (and there is disappointment and struggle for those who teach them too).

The attitude towards failure in relation to school is strikingly different to the one in relation to business. Of course we could say that it’s easier to be upbeat about business failure because it might involve other people’s money. But you could say that about school too. Something about the aims, consequences, and means of each produces different mindsets. How does the way we feel about systemic school failure affect the way young people are taught about what failure means?

Very interesting blog Karen. I have had many recent conversations with people involved in education (including students) about the way that failure is framed within the school world - as a negative thing to be avoided - versus other contexts where failing is seen AS learning.