Games for Tuia is a project led by NZCER working in collaboration with Gamefroot.

We are partnering with schools in Tuia landing sites (Marlborough and East Coast) to support young New Zealanders and their communities to research and tell place-based stories, and share local knowledge through the co-design and co-creation of 2D digital “Games for Tuia”.

Tuia - Encounters 250 is a nation-wide commemoration that marks 250 years since the first meetings between Māori and Europeans during the Endeavour's 1769 voyage to Aotearoa New Zealand. The commemoration tagline is “Dual Heritage, Shared Future”. Themes associated with Tuia include:

To learn more about the project, or to help support our kaupapa, contact: rachel.bolstad@nzcer.org.nz 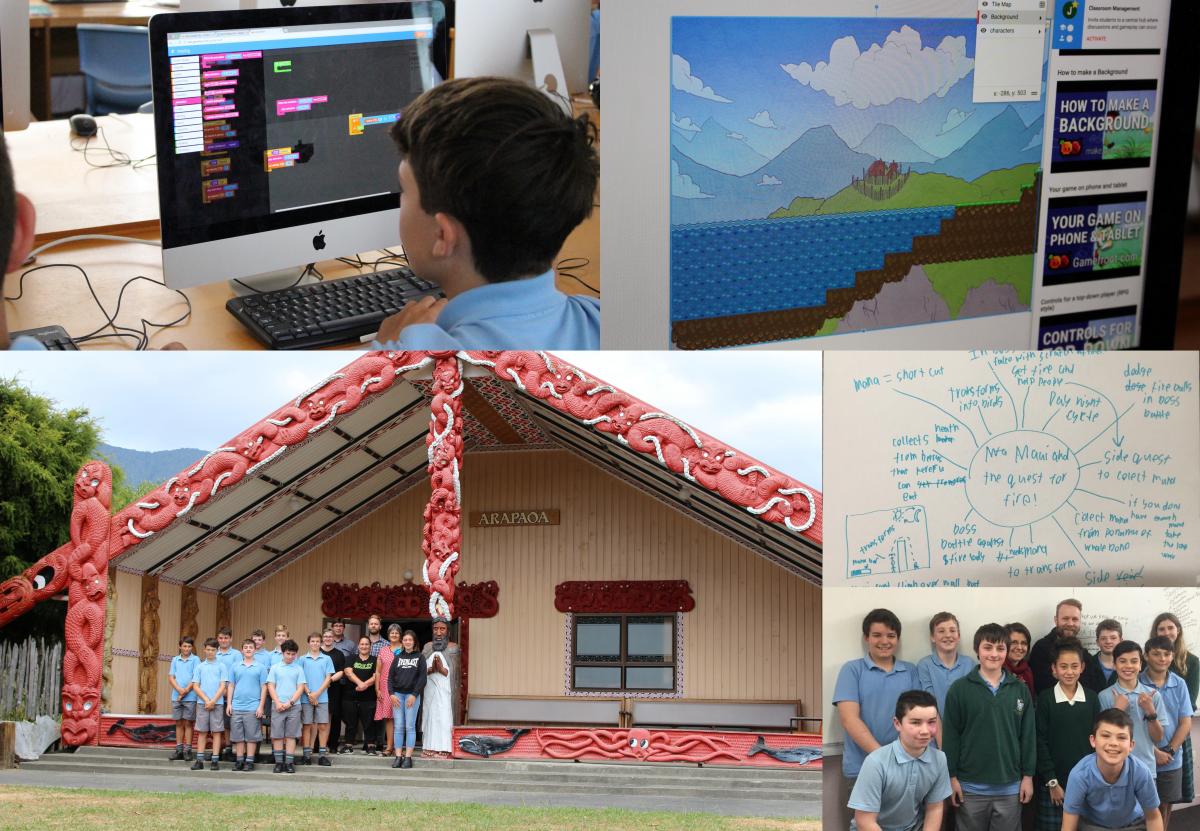 This story was written by Martha van Drunen from Manatū Taonga| Ministry for Culture and Heritage, who accompanied us during one of our project workshops

Year 9 students in the Marlborough Sounds have brought to life the place-based stories and local histories of their region, with a Games for Tuia workshop.

The second Games for Tuia workshop took place over 21-22 February with students from Queen Charlotte College brainstorming (gamestorming!), coding and getting the opportunity to kōrero about local history at Waikawa marae.

The Games for Tuia project is led by Rachel Bolstad from the New Zealand Council for Educational Research and Dan Milward from game coding platform Gamefroot, working in collaboration with schools from Marlborough and the East Coast. The students involved in Games for Tuia are supported to become co-designers and co-creators of 2D digital games which tell place-based stories, drawing on their local histories and the resources within their communities, as well as the themes of Tuia 250. The project is supported through a grant from New Zealand National Commission for UNESCO.

The sun was shining on us in Te Tau Ihu o Te Waka-a-Māui – the prow of the waka of Māui – and the day started bright and early with a powhiri at Waikawa marae. Morning tea included scones with jam and cream (we were well looked after) and then it was into the wharenui, named Arapaoa, for an introduction to the history of the area with Waikawa Marae Trust chairwoman Rita Powick. With the rangatahi and adults curled on the floor, Rita took us through the story of Kupe and Te Wheke and shared Te Ati Awa histories with us. The students also shared what they knew already, and took part in a larger kōrero led by Rita around naming and renaming, the history of the whenua, and the importance of knowing your own history as well as acknowledging that others have their own stories.

Gamestorming the themes of Tuia 250

The afternoon and much of the second day were spent ‘gamestorming’ ideas and reflecting on what the students had learnt from Rita, and making connections with some of the themes of Tuia 250. Dave Thornycroft from Gamefroot also helped the students to brush up on their coding skills, and they were able to begin to create simple games using Gamefroot really quickly. In one instance an unintended coding accident was creatively incorporated into the gameplay to open up an underwater level.

The story of Kupe and Te Wheke proved particularly popular as a game concept. The students also had other creative suggestions that included multiple timelines, contemporary music, shape-changing into birds like Māui, going on journeys with Tupaia or Cook, and showing “the way that Cook sees the land compared to the way that Māori see the land” – using the land for resources or acting as kaitiaki. When Rachel asked who they thought the audience for their game might be, one response was: “maybe people who are curious to know more about who we are and what we know about this land”. Tautoko.

Since the workshop, the Queen Charlotte ākona have been adding to their local knowledge and the school organised a guided boat trip with local historian John Orchard, visiting key sites linked with Cook’s journeys in the area.

Working with other landing sites

Games for Tuia workshops were also held with students at Lytton High School and Tolaga Bay Area School in early March. A follow-up series of workshops with the schools will happen in Term 2.