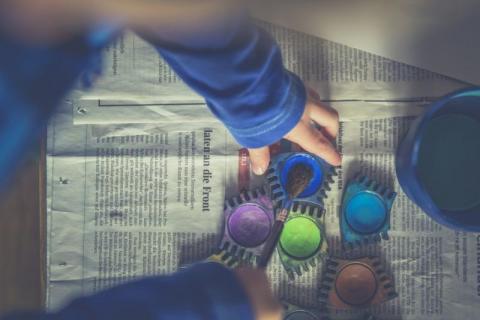 School science fairs get a bad rap. They are often criticised for not promoting real learning, being overly-competitive, advantaging students from already privileged backgrounds, putting extra stress on children, teachers and families, not representing science as it really is, and so on. Despite this though, some people do leave school with very positive memories of science fairs.

We did science fairs at school – that was fun. It was an opportunity to be creative. My father helped me with it – he brought the gear home and showed me how to use it but it was my project.

In fact, these fairs were the only thing about science at primary school that any of these young people could remember! Rather than abandoning science fairs, could they be refocused so that they become one way of making school science more like science in the real world? Rather than focusing on competition and a final product – what if we shifted the focus of science fairs to students participating in a science community? This would involve working together, and critiquing each others’ work at all stages of the investigation. In this way students would be participating in the practices of science – and developing a functional understanding of what science is all about (ie the intent of the Nature of Science strand of NZC). Students would develop and practise their capabilities to gather and interpret data, use and critique evidence, and represent ideas.

Science fairs thought of in this way could provide opportunities for innovation and creativity, to build new knowledge, develop resilience, and a greater sense of what it means to be scientifically literate. However, such projects would take time. Time needs to be put into finding questions in the first place that students are genuinely interested in. There needs to be time for finding out what is already known about this topic, time for critique and  multiple iterations of the design of the investigation, time for collecting sufficient data (and making sense of it), time to make mistakes and go down blind alleys, as well as for group discussions and feedback. If you were to run a science fair project like this how would you manage it? What could you give up or do differently in order to work in this way? What resources in the local community could you draw on?

I think science fairs do have the potential to provide opportunities to embrace the principles of play, passion and purpose which Tony Wagner argues are essential for developing innovators – even if they often don’t currently.  In my next blog I will be further exploring the role of play, passion, and purpose in school science through the eyes of the eight Competent Learners participants already mentioned.

Thanks Ally for this awesome

Thanks Ally for this awesome post, I too think science fairs are very important. They are fun and frustrating, scary and inspiring and they do make a difference - before I tried a science fair I had never traveled to wellington by myself on a train. I was 15 and came from the wairarapa every day for a week to present to the public, teachers and students my prject on 700 years of conservation in Aotearoa. My archaeological excavations for teh science fair had revealed massive reductions in the food choices and availability of food in several sites around the wairarapa coastline from 1300 to the 1800s. The Science fair taught me how to question, challenge and debate my data with the experts, museum curators and scientists. My younger brother analysed the speciation of Moa and couldn't figure out in pre DNA testing days why there were 18 species - (now 9 due to recent discoveries on the relative size of Male Moa) - he too won the science fair top prizes and we both went on to look at science in new inspired and different ways. Winning the Royal Society prize, the Museum prize and a host of other awards set my course for my first career in archaeology, museums and galleries and I was the first of my family and whanau to attend university - all thanks to that first exploration of science through the science fair. Last year our school again took out many of the senior prizes at the Science Fair. One student fresh from captaining the NZ physics team won first prize and also won a $4000 Victoria University Wellington scholarship and a week long, all-expenses paid trip to the “Otago Hands-on Science” week. Previously our school won 16 of the top awards - and this gave our students the chance to travel locally and internationally and the opportunity to learn from the best of the world in Russia, the UK and Israel. This week, in two days, - on friday is the last chance for our students and all students in the wellington region to enter the NIWA Science fair - i would encourage all teachers, parents and students to help give it a go - it's a great way to learn and thats waht we are all about.

Yes, school science fairs are fantastic! We have reorganised our Junior science programme at Cashmere High School to make it compulsory for all year 9 and 10 classes to do a science fair project. Reduced content in our usual topics and scheduled a 2-3 week break for students and teachers to work on their projects. The emphasis is on participation and having fun, although there is a competitive element as well. Here are what some students said about the fair: Student H1: Yeh, that was fun. ‘Cos that was cool working in groups as well because, you get, like, their opinions and stuff on it. l think that was good. And you can chose what you want as well, and like, develop your own opinions. And like, at the end of the day it’s just what you think, not what the teacher or other class mates think. Student J1: Yeh it was enjoyable, I liked working in a team, and also it was interesting seeing what the outcome was. It was interesting because it was different to our hypothesis, like the outcome. Student J2: It was fun. I like when we do these things it’s fun, ‘cos you do the whole thing. You do the poster and you have to do the experiment, and basically kind of, makes you learn more about than just one thing…. I liked it a lot. The idea of creating a community around science is interesting as one of our teachers commented that just yesterday ... you see kids walking around school with their boards, everyone is doing it at once ... students, teachers and parents are all talking about it. I think it has a good 'feel'. David

Another great post to get us thinking. As we are a up to Year 5/6 school we haven't done the traditional Science Fair but instead we have begun running a science expo for our Year 5/6 students, in conjunction with other schools in our district. The students each choose an area of science / experiment and try it out / research the science behind it and then teach it. During the process of finding out about their experiment , they are trialling doing it, modify how they present it and working out what to do if it doesn't work as expected. At the expo the students teach their experiment to small groups on a rotation basis. They all get the opportunity to experience each others experiments and the discussions they have with each other are fantastic to observe. The actual expo day is a hugely positive experience for students and teachers / parents. I myself have fond memories of science fairs at Intermediate and Secondary. However a lot of my positive experiences are because of the guidance my father, a high school physics teacher, gave me. This also relates to that student quoted in the blog post - they mentioned parental support and access to equipment. What are the opinions of the students that didn't have support from home or other sources? My love of science has come from my father and my childhood experiences - how do we ensure that all our students have this same positive experience of science and science fairs?