Growing a kindergarten movement in Aotearoa New Zealand: Its people, purposes and politics

Generations of New Zealanders have memories of themselves or their children at kindergarten, and new memories are being made every day.

The first kindergartens appeared here in colonial times—a revolutionary idea imported from Germany that suggested children would unfold through play. This book tells the story of how those ideas were adopted, adapted, and thrived in New Zealand.

With the New Zealand Free Kindergarten Union (now NZ Kindergartens) about to enter its centennial decade, it is time to remember the people who have been central to the movement and how they have nurtured it for future generations. The story is peopled with powerful personalities who were (and are) committed to the ideals of kindergarten. Over the decades, this commitment led to a string of campaigns to promote opportunities for children and training for teachers. Sometimes the story is one of adversity and survival. Kindergarten has reinvented itself for different times and for different populations and places. It has formed alliances across government agencies, education organisations, and political party lines.

Throughout, children are at the heart of the movement—which is why kindergartens and their associations hold a special place in the hearts of families and whānau they serve.

Authors Helen May and Kerry Bethell have both taught early years education and are widely published. They weave their scholarly research through the story of the people, places, and values of the kindergarten movement. The book is illustrated with photographs and cartoons from every decade.

International customers:  This title is also available from Amazon.com 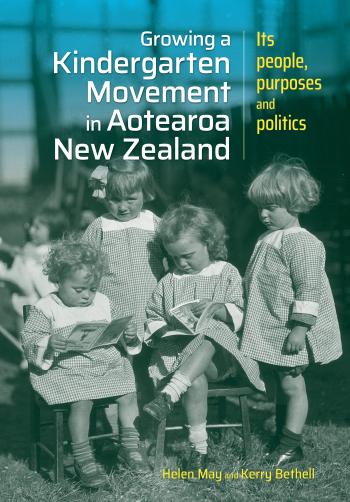 An ebook edition will be available on 7 February