In Their Own Right: Women and Higher Education in New Zealand Before 1945

They were expected to be wives and mothers. Instead, they challenged the traditional domestic roles of the time to gain a higher education for themselves and to carve out new careers and independent lifestyles. As teachers, they went on to influence the pathways of a new generation of women in New Zealand.

This is the story of how higher education has profoundly changed the pattern of women’s lives in New Zealand over the past 150 years. It is the story of a surprisingly large number of women who managed to achieve an academic education, and of those who, taught by those early graduates, became the next wave of educated women.

Kay Morris Matthews weaves together three themes—access to institutions, beliefs about what young women should and should not learn, and the impact of education on women’s life choices—to trace the development of higher education for women in New Zealand. She shows how political, cultural, social and economic conditions shaped their educational choices.

Based on over 10 years of research, In Their Own Right brings these themes to life through the unsung story of Mäori girls’ schooling and the stories of individual women whose remarkable educational journeys challenged expectations and influenced others.

Kay Morris Matthews is a well-known educationalist and a leading education historian. Her work has been recognised both nationally and internationally. She is the coauthor of Education Policy in New Zealand: The 1990s and Beyond and has also published on Mäori education, gender, and higher education. Until recently she was Professor of Education at Victoria University of Wellington. In 2007 she returned to her home region to be Research Professor at EIT-Hawke’s Bay.

Reviews for In Their Own Right

Kay Morris Matthews makes known so many amazing women from our past: revealing their aspirations and struggles to get educated and be educators.

These aunts, mothers, and grandmothers trail-blazed our institutions of higher education, co-opting its forms, reforming its pedagogy, and getting a first rung on the ladder that a later generation of nieces and daughters, like Kay Morris Matthews herself, were able to fully climb.

For Kay Morris Matthews, In Their Own Right is the culmination of a career as a scholarly detective determined that the presence of girls and women will not be sidelined or forgotten in our remembered and recorded history of education in New Zealand.


In Their Own Right reminds us that history is not just made by politicians, or generals, or revolutionaries, but also by remarkable women whose individual acts of determination have collectively changed the world. It is important that we hear these stories. They remind us of the debt we owe to those women who had the courage to be pioneers—and they inspire us to know that, just because some professions are still dominated by men, women today can change that.


Kay Morris Matthews provides a rich and engaging survey of the aspirations and achievements of many able, determined women, giving due credit to the families, mentors, and institutions that supported them—sometimes gently subverting patriarchal officialdom to do so.  An essential reference, and excellent reading. 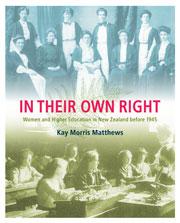