Can conference participants gamify their own learning? 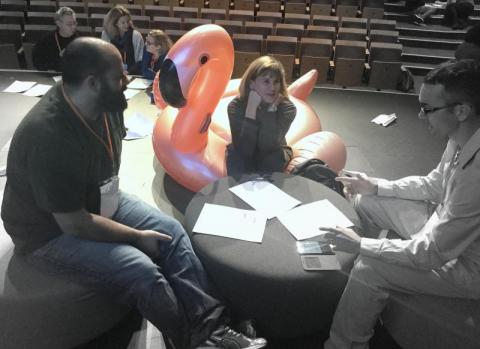 This post is part of a short series to share highlights from NZCER's 2017 Games for Learning conference.

So you went to an inspiring conference. Now what?

Do you know this feeling? You go to a conference and get inspired. You fill your notebook with ideas, plans, and things to follow up on.  You can’t wait to go back to work to put some of your new thinking into practice and share these ideas with your colleagues.

But once you’re back at work you find it’s harder to recapture the buzz. Perhaps you’ve caught a glimpse of where you’d like to go with your practice, but there were too many big ideas to process, or you get stuck trying to figure out what your first steps will be. Maybe it’s hard to convey your new thinking to your colleagues.

We know these feelings. We also know about FOMO - fear of missing out, it's a feeling you may experience when you can't attend a conference you wanted to go to.

Before the Games for Learning conference, we started thinking about how we might help people to keep exploring ideas and putting them into action beyond the conference - whether or not they could attend the event itself.

We thought we could do this in some of the conventional ways, such as posting videos of featured talks, sharing speaker's slides, and writing/blogging about the conference after it was over.

At some point leading up to the conference, we had a lightbulb moment:

Then a second, even brighter lightbulb:

What if the conference participants were the ones to design the game?

Thus was born our one-hour interactive workshop called “If the games for learning conference was a game...”.

How did it work?

Here’s a video of the introduction to the workshop. It was based on a process we’ve used with many groups of teachers and learners over the last few years that we have been calling “a fast-track approach to game design”. The mission, for those who chose to accept it, was to work in small groups to come up with a concept for a game. Each group then had 3 minutes to “pitch” their game idea to the rest of the room for rapid feedback.

We hoped it would be an opportunity for participants to reflect on and consolidate some of the ideas that had captured their attention during the conference, and cook these together into an  interesting idea for a game that others could play.

What would come out of this process? We didn't know, but we were keen to find out.

In just under an hour, our participants came up with 8 game concepts, including a title, tagline, and description of the game. The game concepts ranged from simple and immediately playable card games, to more audacious concepts involving VR and AR.

Here’s a brief overview of the 8 game ideas:

A card game that’s ideal for revisiting and extending your learning from the conference, or for sharing those ideas with other people who weren’t at the conference. This game can be played alone or with others.   Campbell, one of the creators, has blogged a full set of instructions on how to play this game. All you need is a pen and some pieces of paper or post-it notes. Why not give it a try?

This game played humorously with the idea of zombies, a common trope in many popular games.  G.O.A.L is “role-play card game for teachers (or living dead teachers!)”. There are two piles of cards, “concept” cards and “player narrator” cards. The concept cards could be any set of concepts that the school might be focussing on, such as “computational participation”, “algebra”, “physics”, or anything else. The second set of cards are the “player narrator” cards. These might be things like “future-focussed”, “assessment-driven”, “culturally responsive”, “collaborative”, and so on. Each player picks up one narrator card, and their job is to “live and breathe” their narrator perspective as they describe how they would tackle the “concept” being explored in each round.  For each round, one person plays the role of the “judge”, who decides which player contributed the best narrative response for that round. The role of “judge” moves around so different players take turns in this role.

Tagline: “What does it mean to be us?”

This game is a virtual reality experience, designed to help the player reflect on and process what they have learned from the conference. The game is like being in an immersive maze. Players begin in a virtual room where they consider why they have come to the conference. Looking around the room they see a “mirror” on themselves and all their own thinking. As they move through the maze they can pick up ideas and try them on, or put down ideas they came in with that are no longer useful. This virtual environment removes limitations, opens up possibilities, and helps the player see the links and connections between ideas.

The goal of this game is to help people to understand and see the value of games, and building connections. It’s a role-playing augmented reality (AR) game, Dungeons & Dragons style. The game could be played by anyone - teachers, students, or parents. Participants wear AR goggles. Before coming to the conference they have built their avatar. The conference facilitators are “the provocateurs to action”, providing players with quests to go on or pieces of information. Participants must seek items, solve puzzles, meet people, and so on, gaining points through these activities.

Tagline: “A Game of Critical Mass”

The game is about building a system/network for achieving a “critical mass” for change or action in a new direction. Imagine a solar system, with different characters or “roles” being nodes in the system. In the game, people assume different roles. These could be “the novice”, “the techie”, “the philosopher”, and so on.  The game involves creating purposeful interactions between the characters that enable a range of perspectives on an idea to be discussed. The novice might come up with a statement such as “why would I bother to do this in my classroom”? The game would then trigger a series of interactions, where different players respond to the idea from the different lenses or perspectives attributed to their character.

Description: A physical game. Players are given a question, and have to use resources from the conference to answer their question before a timer runs out. The timer has a countdown and sound effects which help to build suspense. When the player has answered their question, they get a code number and are given a next question.

A game for people who want to explore the “world” of the Games for Learning conference. This game presumes the player is likely to be someone already interested in games for learning - perhaps someone who missed the conference - and is therefore likely to want to go “exploring” in this world. The initial gameworld is created by considering  everything in the conference using Bartle’s player interaction grid, to look at what type of play interaction or engagement it involves (e.g. interacting with other people, exploring the “world”, acting or interacting. Points of interest from the conference would be represented as (for example) a tower in the distance to be explored. As the world is explored, new pathways are created. What players do within the world can change the world itself. The gameworld lasts beyond the conference, and people want to keep revisiting it because the world keeps evolving and changing as more people explore, add to, and modify it.

This game was designed to support learning within one of the conference participants’ contexts: nursing education. It’s a multiplayer online collaborative digital game that promotes and supports collaborative learning. Logging in, the players have options to choose from, such as going into the surgical ward, GP practice, operating theatre, etc. A group of players chooses which option to go into. Inside, they encounter patient scenarios, and choose one. They have a challenge to work on together, choosing medication and calculating dosage (practicing math skills that they need to be competent in). The game shows the outcome for the patient - if successful the team moves on to the next level challenge.

What's next for these ideas?

The game ideas that our workshop participants came up with were a great starting point. They showed creativity and suggested that  participants were thinking hard about how to integrate all the learning they'd experienced at the conference, and how that could be transformed into a game experience that might provoke deep thinking and engaging learning for others.

The next step would be to further refine some of these ideas and start making up playable prototypes that could be playtested - and improved - over and over again in an iterative design process. We didn't have time to do this at the workshop, but perhaps some of these ideas might progress further.

We hope it inspires these designers to try keep trying to design their own games, or encourages them to initiate a game design workshop in their classrooms or staffrooms.

What do you think of these game ideas? Which ones would you like to play?

Are you inspired to try brainstorming (or “gamestorming”) your own game concepts?

Would you like to attend a conference  where the whole thing was structured in the form of a game?

Drop us your comments below!