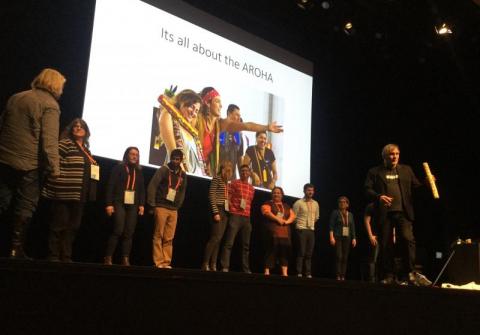 This post is the beginning of a short series to share highlights from NZCER's 2017 Games for Learning conference.

Harko Brown was the first featured speaker at the 2017 Games for Learning conference.  We invited Harko to share his knowledge of ngā taonga tākaro, traditional Māori games, and his perspectives on their relevance for education now and into the future.  If you missed the conference, don't fret, as you can watch a video of his talk here.

For anyone who thought the conference might focus primarily on digital games, traditional Māori games may have been a surprising place to start. But for us it was the perfect place to start. Current talk around games in education tends to be dominated by a focus on digital games, digital technologies, and often international examples.  Yet games - tākaro -  were an integral part of learning in this land long before the invention of computers or “school”. As Harko put it:

When Kupe first sailed to Aotearoa a millennium ago he was invited by inhabitants already here to hākari (game play, dance, sing, whaikōrero). Games were the nexus of society, supporting education and sustaining social order in the land of the long twilight. (Harko Brown)

Before the conference, I’d read Harko’s book Ngā taonga tākaro II, The Matrix , which I found fascinating. I’m very inspired by his commitment to the idea that:

utilising the intricacies of ngā taonga tākaro with our young people today, we can advance forthrightly into a spiritually rich and societally transformative future. (Harko Brown)

I’ve revisited the book and his conference talk, and I still feel I’m only grasping the edges of some very deep and profound ideas to be gained from Harko’s work.  I’m conscious that my understanding is framed by my own cultural lenses and limited fluency in te reo Māori. With that caveat in mind - and in the spirit of sharing my thinking out loud as I learn - here are four things I learned about ngā taonga tākaro from Harko Brown.

Idea 1:  Tākaro were part of a curriculum shaped by, for, and with the community

As Harko explains, tākaro were woven seamlessly into community life, serving many valuable purposes, including knowledge and skill development amongst people of all ages. What’s more, tākaro were designed, adapted, modified, and ameliorated by the community to continuously strengthen their function, relevance, and enjoyability.  He writes that:

“tohunga, tribespeople and tamariki themselves had input into the...development of games. If a physical, social, or psychological skill was thought necessary for tribal resilience it would be studiously integrated into a form of popular play” (Brown, 2016, p.20)

This idea in itself is powerful - that the whole community, including children, could be part of the design of a “curriculum” that integrated games for learning. He goes on to share numerous examples of this, as well as how games were interwoven with other elements such as stories, songs, dance, and celebratory gatherings.  Furthermore, tākaro were highly localised in nature, reflecting the diversity and creativity of different iwi and hapu.

“Māori thrived on diversity, on intellectual curiosity and stimulation and differences were a key part of hapū life because they morphed out of their environmental habitats, which were never alike from tribe to tribe” (Brown, 2016, p. 27)

It is fascinating to understand tākaro as a highly localised and community-driven curriculum, imbued with knowledge, values, and unique resources of that community. It’s easy to see how teachers and students could adopt a place-based approach to explore tākaro from their local area, as some are already doing. I also love the idea that students and teachers could take a localised approach to the development, revitalisation, or modification of their own tākaro. These would be great ways into engagement with Te Takanga o te Wā.

Idea 2: Tākaro are a conduit for connection between communities

Harko writes about the process of tatū, whereby communities would meet before a gathering of festivities to discuss how to integrate key elements of each others’ tākaro, in essence creating a new version of the tākaro that reflected an intertwining of both communities.

“The idea is to make a game relevant to the sides playing to honour their respective whakapapa and the rohe in which games are being hosted.” (Brown, 2016, p. 49)

This is a powerful and interesting idea. Rather than thinking of a game or tākaro as having a fixed set of rules that always stay the same, the tatū process shows that who is playing the game matters. When groups come together, the game itself can be redesigned to take account of who the players are, and to further strengthen the opportunities each side has to learn more about the other. I love this idea that community connections are formed and strengthened through the creative exchange and fusion of games. In the video, you’ll see Harko engage audience members to show how this concept can also apply when tākaro are interwoven with games from Pākehā and other non-Māori cultures to create fusion forms.

A taonga is something to be prized, treasured, valued.  It strikes me how different this is to some of the ideas we have about “games” in contemporary Western culture, which often tends to hold games in low regard. They’re considered trivial, frivolous, or purely a form of entertainment or distraction from “real” learning or “serious” work.

Tākaro and “games” are not necessarily interchangeable concepts - each concept is shaped by, and makes sense within, the broader cultural contexts and worldviews that define them. Tākaro and “games” are similar in some ways and are radically different in others. Thanks to Harko, I gained a little bit of insight into some of the cultural, historical, environmental, and spiritual contexts surrounding some of the hundreds of traditional tākaro that he has researched. As well as uncovering the layered contexts, meanings, and traditions associated with ngā taonga tākaro, he also shows how educators can bring these to life with learners in the present. You can see examples of this in the video, or in the book.

Thinking  about tākaro or other forms of games as treasures or prized possessions that one generation safeguards and hands on to the next has given me some new questions to ponder. For example:

Idea 4:  The ongoing impacts of colonisation on tākaro must be acknowledged

Needless to say, every aspect of pre-European Māori culture was disrupted through the process of colonisation, and tākaro were no exception. Speaking as a non-Māori New Zealander, it was important for me to understand that the people who hold knowledge about traditional tākaro sometimes do, and sometimes do not, wish to share knowledge about certain tākaro, or see them revitalised, because

...[they] feel that such taonga have had their day, when they were exalted and properly cared for, before the mauri of the land was forever changed by colonisation (Brown, 2016, p. 26)

Harko writes and speaks about the dualities of loss and revitalisation far more eloquently than I can. Watch the video to see his position on revitalisation of tākaro and why he thinks it is important.

What did conference participants think?

We had some great feedback and reflections about ngā tākaro  after Harko's talk:

"Why are we not using more traditional games in NZ?"

Do you have thoughts or questions about Harko’s talk, or about ngā taonga takaro? Feel free to post a comment!