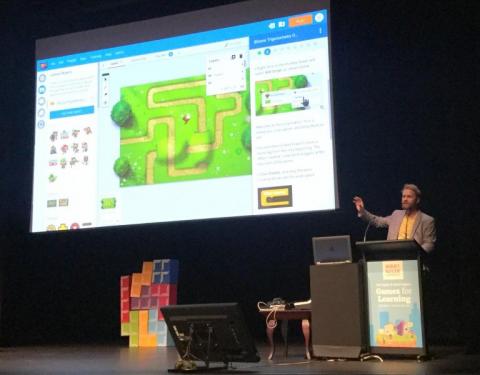 As I noted in my last post, it’s not uncommon to find that people working in game development want to make a contribution to education.

But it’s one thing to aspire to this, and another thing to actually do it.

This post highlights two game developers, Dan Milward and Maru Nihoniho, who presented at Games for Learning as part of a symposium on “STEM and digital games”. (STEM is an acronym for science, technology, engineering and mathematics).

I see some interesting parallels between Dan and Maru’s stories. Both started off working in commercial game development, and over time, have gravitated towards an educational and social impact focus.

How did this happen, and how are they trying to use their game development knowledge and skills to benefit learners? Dan is the CEO and founder of Gamelab, the makers of Gamefroot, a game-building platform that enables users to easily create and share digital games.  He was also part of the organising team for the Games for Learning conference, and has collaborated with me on several game-based learning initiatives and projects over the past few years.

Unlike other popular coding and game-building platforms such as Scratch, Gamefroot was not designed with an educational intention in the beginning.

We thought we were making Gamefroot for other independent game developers [to make it easier to quickly make commercial games]...we were sorely wrong...When we launched, all of our users were teachers and kids. We thought “whoa, what do we do with this?” (Dan Milward)

Thus began a long and ongoing journey for the Gamelab team to re-orient their focus from commercial game development into education.

We had to learn a whole lot of stuff. Basically we had to work with teachers and students to make a piece of software with them, that was for them. (Dan Milward)

You can hear more from Dan in this video of his talk. Some of the key points he covers include:

Maru Nihoniho on hacking her successful games for an educational purpose Maru also began her game development career with a focus on developing commercial games. She had early commercial success building a Playstation game called Cube (see how it plays here). Maru  went on to develop other successful projects including SPARX, an interactive game based on cognitive behavioural therapy, designed to help young people/rangatahi manage their depression.

I’ve been a fan of Maru since meeting her at an Edtech conference a few years ago. She’s an inspiring example of someone who has turned her own personal love of games and gaming into a successful career. More than that, her personal drive to use her game development knowledge and capabilities for educational and social impact is evident. Ten years after releasing Cube, she’s now circling back to “hack” the game with a clear educational mission in mind.

You can hear more about this by watching the video of her talk. Some key points she covers include:

If STEM is the tree of knowledge, then Tākaro is the seed. (Maru Nihoniho)

Both Dan and Maru are keen to continue making connections with educators.  Watch the videos to see how you can get involved with their projects.

I’m curious to see what happens with their initiatives over the next few years. What do you think about their projects? Leave a comment to share your thoughts.