James Everett on working in game design, and two ideas for discussion 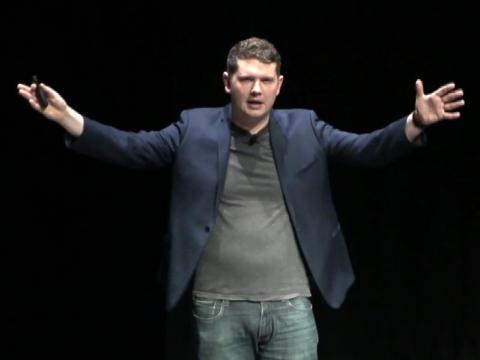 This post is part of a short series to share highlights from NZCER's 2017 Games for Learning conference.

Have you, or your students, ever imagined working in game design or another creative digital industry?

How do people find their way into this kind of work? What mix of skills, knowledge, and dispositions do you need to flourish in these fields?

When we first started the Games for Learning research project,  I knew very little about the game development industry in New Zealand, who was working in it, and what kinds of work they were doing.  So I started attending game developer meetups and conferences.  I read books for game designers, and looked at some of the research coming out of the games sector.

It was interesting to peek into game developers' worlds. Sometimes the educational relevance of the things they were doing or saying leapt out at me. Other times I wondered “but what are they talking about?” or “what would a teacher get out of hearing this?”.  I kept thinking “wouldn’t it be great if educators and game developers had more opportunities to meet, talk, and even collaborate?”

But making those connections isn’t always easy. If you’re an educator, you might find it hard to justify attending a game developer’s conference, and vice versa. If you do start to lurk in each other’s professional worlds,  it can be hard to understand each other’s jargon, or to see the points of connection between your work.

We know there is interest in making these connections on both sides. We’ve met teachers in the Games for Learning research project who have been proactive in reaching out to game developers. We’ve also met people from the game development sector who want to be more involved with education.

The Games for Learning conference brought  educators and game developers together so that they could connect,  build relationships, and learn more about each other’s work.   Over the next few posts I want to reflect on some of the contributions that game developers made to the conference, and some key ideas that educators might grab hold of as they consider the role of games and game design for learning in their classrooms.

We were lucky to have James Everett, the outgoing chair of the New Zealand Game Developers Association, give us an overview of the game industry in New Zealand. He told us a bit about his work in this sector, and took questions from the audience. Here’s the video of James’ full talk.

Some of the points he addresses include:

James also discusses some of the core capabilities that people need to draw on, as individuals and teams, to work successfully in game development. Around 8 minutes into the video, he runs  through some ways in which game design draws on skills such as communication, creativity, cultural engagement, critical thinking, collaboration, and curiosity. (This list of Cs was borrowed from previous speaker Tara Fagan, who’d explained that these concepts underpinned the learning design philosophy of Hīnātore, Te Papa’s new learning lab).

Two ideas for educators and game developers to keep discussing...

Reflecting on James’ talk, and other things I've learned from lurking around in the game development sector, here are two big ideas that seem worthy of ongoing discussion between educators and game developers.

I hope you’ll let me know what you think in the comments!

Idea 1: Game design is a means for developing useful and transferable capabilities

This is one of the key areas in which educators and game developers can find common ground and perhaps even start to speak the same language.  Some teachers who presented at Games for Learning talked about cultivating these same kinds of capabilities - or seeing them emerge - amongst their learners during game design projects in the classroom. Yasmin Kafai also talked about this in her research on what students learn from making games.

This says a lot about the authenticity of game design as a process. When we consider what people actually do when they are designing games, the kinds of challenges they encounter and need to overcome, and the learning that happens along the way,  it doesn’t necessarily matter whether those people are school students or game design professionals.  Game design is ripe with challenges that grow, test, and stretch whatever knowledge and capabilities designers bring to the task.

It might be easier for teachers to plan for and justify time spent on game design in the classroom when they (and their students) see how these experiences can be “telescoped” to a fairly realistic projection of capabilities they will need to call on in their future lives and work. A few years ago,  while writing key competencies for the future, my colleagues and I were grappling with the idea of finding clearer “lines of sight” between school learning to develop students’ capabilities, and complex future challenges that demand the application of those capabilities. Now I feel like going back and writing an extra chapter about game design!

As an aside,  last year I attended  PAX Aus in Melbourne, a festival that celebrates all aspects of gaming culture. One highlight was a panel session called "How the h__ did you end up in games?" The adult panellists got into the game development industry from  all sorts of different careers and backgrounds, including a nightclub bouncer,  a geneticist, a primary school teacher, and a retail worker. Each panellist  reflected on how experiences and capabilities from their previous work had transferred into their game design lives. The take-home message I scribbled down was something one of them said: “there is no such thing as a useless skill in the game design industry”. What they were saying was that game design draws on so many different kinds of knowledge, skills, and capabilities. In their opinion, almost any prior learning or life experience that helps to shape you into a more interesting, creative, organised, social, reflective, hard-working, time-managing, persistent, empathetic human being is going to serve you well in the game design world. Conversely, game design work generates so many opportunities to learn so many different things that are transferable into other aspects of life and work.

Idea 2: The game development sector is a great context for exploring diversity, equity, and inclusion

The second big idea is that the game development sector can be thought of as a microcosm for society, thus reflecting some of society’s better and worse qualities.  In particular,  it provides a context for examining diversity, equity, and inclusion challenges and opportunities - and what the implications are for education.

As James mentioned in his talk,  the underrepresentation of women in the game development workforce is one of the current issues for the sector in New Zealand. A statistic like this can be seen as just the tip of a bigger “iceberg” of ideas around participation, access, equity, diversity, and inclusion.  The question of who is likely to participate and succeed in a field, and what kinds of enablers and barriers make it easier for some people and harder for others, is as important in the game design sector as it is for other sectors.

This seems like another obvious place where educators and game developers can come together in search of common ground, or even to work as allies in the task of achieving greater equity and social balance. Yasmin Kafai’s research on digital participation through student game design and other forms of “making”  is another touchstone for these ideas.

I’ve been really interested to see the way in which questions around equity, diversity, and inclusivity are talked about in the game development sector. At conferences like PAX Aus, or Games for Change, elsewhere, people are talking about  the value and importance of diversity in games and gaming.  They point out that the greater the diversity of people making games, the more varied, creative, and diverse games will be, telling many different kinds of stories, and so on. (Never Alone, which featured at the Games for Learning conference is a standout example). Game characters and stories that emerge out of diverse life experiences and worldviews create fantastic opportunities for cultivating player empathy – seeing the world through different eyes, just as films and books and television can do.

These are all strong messages for us as educators to tap into in our work around supporting young people learning through gaming and game design. For example:

What do you think about these two ideas? Do they resonate for you, or leave you with further questions? I’m curious to hear what you think - drop me a comment below!