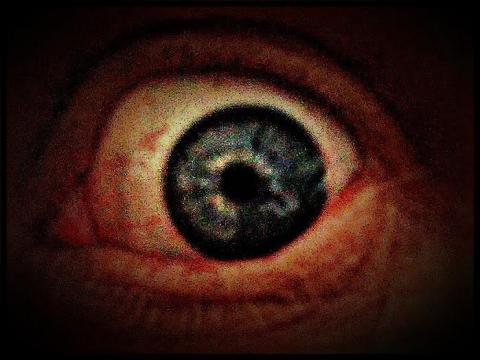 Meet Bob. Bob is a floating eyeball with a hard luck story he's dying to tell you. Are you willing to listen?

Welcome to the world of games in the classroom. Bob is the creation of a Year 7 student who wanted to build a digital game examining empathy – a concept he and his classmates had recently been exploring with their teacher. The game featuring Bob was designed and coded (using the Scratch language and platform) over a few weeks in late 2015.

I met Bob during a school visit that was part of the Games for Learning research project. I sat with the rest of the class as Bob's creator showcased his game, asking the class which choices the game's protagonist should make as he and they grappled with Bob and his hard luck story. The class was rowdy and enthralled, shouting out their opinions and thoughts and laughing at the consequences. And I was fascinated.

Here Bob's creator was an experienced game designer demonstrating his new game to a panel of experienced game players. And the teacher facilitating the demonstration was neither a gamer, a coder, nor a game designer. What was going on? How did the various parties here understand their own relevant expertise and that of the other parties? Across the schools involved with the Games for Learning project, my colleagues and I saw or heard about a number of variations on this story. And it made me wonder,

How do teachers and students view student expertise in game-related activities in the classroom?

The students we spoke with recognised their own expertise with games, as well as the expertise of their peers. They recognised that some students had more expertise than others and that some had what they saw as specialised skills such as coding or software management. Interestingly, the students didn't indicate that they thought that their gaming expertise was special or unusually valuable other than for recreational purposes – it was just part of their day at home and school and was something that they didn't think very much about.

On the other hand, the teachers we spoke with fully appreciated the value of student expertise. In fact, several teachers spoke in amazement about their reliance on it, especially when preparing games and game-related activities. A number of teachers described having thoroughly planned a game-related activity yet still needing to draw on student expertise to overcome technical issues. As one teacher said:

They did some of the computer stuff I couldn't quite figure out. I just kinda set them up and said "here's your challenge". And they did it. Teacher, Year 4-6.

Both students and teachers mentioned the social nature of student expertise in game-related activities. Students appreciated being asked to use and share their own game-related expertise and were quickly able to describe which students in their class possessed which particular game-related skills. A number of teachers observed that games enabled students who were not usually seen as experts in other school activities or didn't connect socially with the rest of the class to demonstrate their abilities to their classmates in a socially acceptable and enjoyable way. That is, the teachers were convinced of the social value that expertise in games enabled within the classroom.

Games for learning
Schooling for the future

Kia ora Elliot. I've just read an article which suggests there aren't enough studies that focus on the role of students as tutors/scaffolders of each others' learning in game-using classrooms. If that's true, that is pretty interesting, since it was obvious to many of the teachers in our study that students could often perform this role for each other or for the teacher. The study I read looked at what happened in a secondary social science class in Spain where a videogame was being used as part of curricular activities. They found that students often spontaneously scaffolded more novice peers, particularly some of the procedural aspects of how to use/interact with the game. They did things like pointing out relevant features and reducing the novices' frustration with figuring out the game. The authors of the study concluded that, since students can perform scaffolding/tutoring fuctions for each other, that this should be intentionally designed into the game-using classroom. That's not exactly surprising and again I think was fairly obvious to many of the teachers we have interviewed. However another point the article makes (which I think is actually quite useful) is that teachers who are designing game-based learning in their classrooms can think about how to make that student-as-tutor role even more visible in the design of learning activities, and think about how to stretch students so they can scaffold each other's thinking at the reflective, conceptual, and metacognitive levels as well. Reference: Monjelat, N., Mendez, L., & Lacasa, P. (2016). 'Becoming a tutor: student scaffolding in a game-based classroom'. Technology, Pedagogy and Education. (I've saved you having to read the article by pulling out the most useful bits).