Was education on the agenda at COP26? 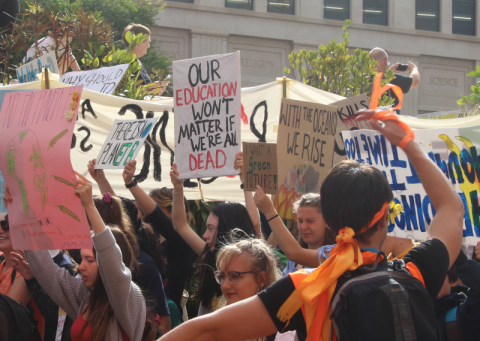 Yes, education was on the agenda, and there were some positive developments.

As the dust settles on COP26, many climate activists will be feeling disappointed about yet another agreement that does not put the world on track to limit global warming under 1.5 degrees Celsius.

I’m not going to analyse the details of COP26 agreement, nor its implications for global warming - you'll find plenty of that elsewhere. Instead, I want to look at how education featured on the COP26 agenda.

There are some positives here, with some countries making key education pledges and commitments that go further than what we’ve seen previously.

The UK and Italy led the way on climate education commitments

On 5 November, Ministers of Education and Environment from dozens of countries met in an “historic event” on climate education, co-convened by the governments of the UK, Italy, UNESCO and youth partners MockCOP and Youth4Climate.

Headlining the event was the UK’s Secretary of State for Education, who announced a draft education strategy for sustainability and climate change. Stating that “education is critical to fighting climate change” (p.4), the draft strategy includes a vision that, “The United Kingdom is the world-leading education sector in sustainability and climate change by 2030”, and maps out a “whole-system approach” to achieving this, including commitments around resources and training for teachers, support for green skills and careers, emissions-reduction and adaptation in school buildings and properties, sustainable operations and supply chains, and leadership opportunities for learners.

Italy’s Ministers of Education and Ecological Transition also spoke about the crucial role of education,  linking climate education to the core values of peace, democracy, and collaboration, and calling for transformational approaches. As the Italian Minister expressed it, “We have to transform our schools, and to consider that we have the opportunity to start from environmental crisis and climate crisis to build up a new world – starting from the school”.

Education Ministers from other countries also made climate and sustainability pledges

Ministers from other countries also made various pledges and commitments. I noted down the names as I watched a recording of the event: Finland, Sri Lanka, Andorra, Cameroon, Spain, Nicaragua, Greece, Scotland, Malawi, Colombia, Japan, The Commonwealth, North Macedonia, Jersey, Sierra Leone, Gibraltar, Korea, Armenia. The substance of these pledges varied. Some promised to deliver comprehensive strategies and action plans. Others made commitments to teacher training and resourcing, mandatory curriculum, and/or including climate in education “at every level” of learning. Some Ministers put timeframes on these commitments, ranging from the next 1-2 years, to the next decade.

I’m sure the international community of climate education researchers, educators, and young people will be scrutinising these commitments, and their follow-through, very carefully over the coming months and years.

As far as I could tell from 18,000km away, New Zealand was one of the countries not represented in the education forum, and certainly not among those that made education pledges.

Youth delegates asked that those present at the meeting would work with them to improve engagement and involvement of more countries for COP27, and said they were seeking “bold policy commitments” and a commitment to working with young people, “ensuring that youth voices are central in remaking education in response to climate change”. Youth entreated on Ministers to commit to these three things:

Young people had tough questions for Ministers of Education

During a panel session, youth delegates also posed a number of questions to Ministers who had made climate education pledges. For example:

In light of the immediate opportunity to help to shape New Zealand’s Emissions Reduction Plan, these and other questions may be useful for young people, and educators, to be asking our own Ministers.

There are – of course – already some things happening to support climate and sustainability education in New Zealand. But so far, we have nothing that approaches the level of a whole-system strategy, such as that just announced by the UK. I noticed that part of the UK strategy includes the Secretary of Education becoming the “Climate Change Minister” for the Department of Education, which does seem to underscore a strong commitment to the agenda.

What educational commitments will New Zealand make on climate and sustainability?

While it’s important to see what other countries are doing, it’s equally important to remember that we can’t just pick up and replicate overseas models. If we did have a high-level education strategy on climate and sustainability in Aotearoa New Zealand, such as the one just announced in the UK, it would need to reflect the unique circumstances and opportunities of our place, and our systems. There are some things I think we have the potential to do better than almost anywhere else in the world. There are opportunities to build on some of the existing good practice and policies that are just a short step away from a comprehensive commitment to education for a socially-just, bicultural, and inclusive transition to a low-emissions future.

I wonder what pledges and commitments New Zealand’s Ministers of Education might be able to make to progress climate and sustainability education by the time COP27 rolls around?

Thanks Rachel, for that very

Thanks Rachel, for that very helpful summary. I had read through the UK draft strategy when it was released and noted that it focussed strongly on teacher preparation, student leadership, operational practices and greening school grounds. It seemed less clear how climate education was actually going to be included in curriculum. I also wonder why governments feel the need to claim they will be the world's leader in educational activities as though this is some sort of competition! I hope that our Government will take note of this new UK strategy and other initiatives around the world to take more action on climate education in Aotearoa.

This is very helpful and

This is very helpful and heartening information, Rachel. It will certainly influence the Emissions REduction Plan submission I'm working on.