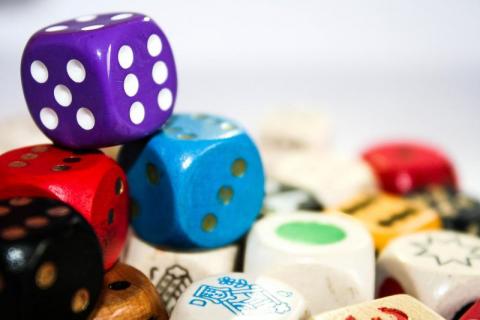 In my last blogpost, I talked about the different motivations and pathways that have led teachers to bring game-based learning into their practice. Some of the teachers in our project self-identified as "gamers", and this was a big part of their motivation to bring games into their teaching. We have already met one gamer teacher,  Andrew.

In today’s post, we’ll meet a trio of gamer teachers, Pete, Justin, and Jeremy, who bring gaming into their secondary school through two co-curricular programmes.

Pete, Justin, and Jeremy are colleagues at a secondary school who teach mathematics, science, and English respectively. In late 2015, Pete contacted us to ask if we were interested in coming to see the Year 10 gaming camp that they ran at the end of each year.  When we visited, we learned that the teachers also support a weekly after-school boardgaming club open to students at any year level.

Pete, Justin, and Jeremy were clearly a tight team. They told their story together, often finishing each other’s sentences, using “we” and “us” to narrate their learning journey with games. In this blog we quote them as if they were one narrator.

How did the gaming activities get started in their school?

The teachers were motivated to initiate the gaming activities as a way to engage and build capabilities in students whose needs and interests were not necessarily always met well by other co-curricular activities.

I can’t even remember how many years ago [it started] but it was quite a few.  We brought in the idea of this [year 10 gaming] camp because we saw a group of students that were staying at school …that weren’t being necessarily catered for and we wanted to try and make sure that there was a valid learning experience [for them].  Sure, you can go down a river and you know, camp out and what not, but there’s also value in this kind of stuff too. (Pete, Justin, and Jeremy)

In both the gaming camp and weekly boardgaming club, a big focus is on playing games – often quite complex and difficult games that require a lot of figuring out of rules and how to play. Every aspect of this is seen by the teachers as an opportunity for students to think, problem-solve, and be actively engaged in learning.

…kids come in, select games and then play them in groups…But…it’s not passive.  We say “try new [games]” and then we talk about what was good about the game, what wasn’t…We get them to use internet resources, quite often there will be sites that have summary PDFs on how to play the game. So we encourage them to think more and be active in the game.  That’s our goal really. (Pete, Justin, and Jeremy)

Justin, Jeremy, and Pete have a particular interest in role-playing and strategy games which call on students to think, problem-solve, and stretch themselves. The teachers likened this to other co-curricular learning, such as school camps, where students are frequently encouraged to try new things and step out of their comfort zones.

The teachers described role-play games as a kind of "next level gaming...because they're so immersive".

Games in the classroom vs. co-curriculum opportunities

Justin, Jeremy, and Pete also use games for learning within their subject teaching to an extent, for example, cooperative boardgames like Pandemic (in science) and role play games like Werewolf (in English). However, the gaming camp and the boardgaming club seem to provide an additional degree of freedom to focus on the open-ended learning opportunities that the games offer, unconstrained by time and assessment demands.

The difficulty [with trying to use games for learning in subject classes] is, the stuff we set up in gaming camp and gaming club, you have to set up in a class and that’s much more difficult when you’ve got X amount of content. (Pete, Justin, and Jeremy)

All three teachers expressed a clear and consistent view as to what they were hoping to achieve through their various game-based learning activities. It was about equipping students with the skills, confidence, and capability to lead their own learning, solve problems, be creative, and figure things out for themselves.

We have to give them enough skills…So that the important stuff can happen which is analysis and problem solving and creativity….we thought once upon a time we could tie this [gaming camp] to a whole lot of standards and stuff. But, that kind of fell by the wayside because rather than trying to make this fit an assessment, we just wanted to do it for the value of inherently, you know, developing good skills. (Pete, Justin, and Jeremy)

These educational philosophies infuse their professional practice and have influenced ongoing conversations amongst the school staff about how school can do more than just prepare students to “seek right answers”, or do only what is required to achieve credits.

all of those educational experiences [we are aiming for], they all have that common idea of problem solving. Of becoming an expert and doing it for themselves …rather than any external gratification. And evaluation….Getting them to just think critically about why they doing what they’re doing. (Pete, Justin, and Jeremy) Although non-digital games have been the main focus in the gaming camp, the teachers were starting to turn their attention back to programming and digital game-creation as well. The next thing on their horizon involves using the Raspberry Pi, a small low-cost single-board computer designed to promote the teaching of computer science in schools through DIY computing.

This year we brought that programming side of things back with the Raspberry Pi. We haven’t fully explored that yet but I think that’s going to be a huge path for us… (Pete, Justin, and Jeremy)

What excites Pete, Justin, and Jeremy about the Raspberry Pi is, again, the potential for students to have to think, communicate, build, and problem-solve in order to create something together. They talked about how, when the Raspberry Pi first arrived, they were flat-packed and students' first job was to literally assemble the small computer, figuring it out and problem-solving along the way,

[Then] they worked out how to set up a LAN and they were all playing each other in a game and we hadn’t told them how to do that…We were genuinely surprised when they’d done that. (Pete, Justin, and Jeremy)

We hope to check in with these teachers and their gaming camp students again later in 2016.

Is there a gaming club in your school?

Gaming camp! What a great

Gaming camp! What a great idea. I've been thinking the same thing could work for the Level 3 History games we are using too...