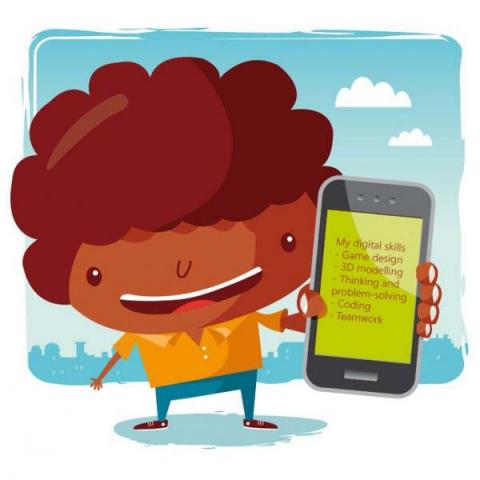 In this blog series we’ve discussed a range of different motivations and pathways that led various teachers in the Games for learning project in the direction of games and/or game design in the classroom. We’ve met gamer teachers like Andrew, Pete, Justin, and Jeremy, whose own passion for games spills over into their professional practice. We’ve met play-based learning advocates like Caro and Leanne, and enthusiastic explorers like Diana-Grace and Jesse who, despite not starting out as gamers themselves,  have become supporters and champions of their students learning through game design and play.

The STEM and digital futures advocates

In today’s post we will look at one final motivation shared by some teachers in our study. We’ll meet Nick, a Year 5-6 teacher, and Sheridan, a high school teacher of digital technology, who shared similar goals of developing capable, flexible “digital problem-solvers” in their classrooms, and use digital games and game design as a vehicle for the development of students’ digital capabilities and potential future prospects in STEM-related careers.

In 2015 Nick was teaching at a low-decile school and had a special responsibility for leading a school innovation, a STEM (science, technology, engineering, mathematics) classroom for Year 5-6 students.

So essentially, we’re looking at a different model of learning for our school based on some identified under achievement of literacy and numeracy, and we’ve also identified that we don’t feel our students are getting the digital literacy or getting the skills needed for the future.  (Nick)

The programme was still in a development stage when we visited in late 2015, and was set to launch fully as a pilot year in 2016. The goal of providing students with more opportunities to engage with STEM was both to enhance their achievement in standard areas like literacy and numeracy, as well as to provide inspiration, digital skills, and pathways to further learning and careers.

[Future] employment is a big part of it as well, careers.  So we’ve identified year 5 and 6....we’re hoping to specifically target skills that we think will help them with future employment.  So essentially, if you took a kid in a regular class and a kid in our [STEM] class and they came out with the same literacy and numeracy scores, our student would also be able to code, use a variety of different digital platforms, [work with] robotics, (etc).  We are basically trying to set up these very flexible problem-solvers.

The overarching intention of the project was to build students’ capabilities through active engagement with STEM activities - including games, which were still a new area for Nick.

We wanted to create a curriculum around gaming but I’m new to it.  I played games but I don’t understand where the learning comes in other than, you know, really superficial like storyboarding and stuff that we basically would have copied from making videos or movies.

An important component of the project Nick led at his school involved reaching out to the STEM community for expertise and support. Being new to games, Nick reached out to game developers and tech companies to look at various game-creation programmes for students. They initially tried Project Spark, found this was a bit too difficult, and then started exploring simpler visual coding platforms like Kodu and Scratch

We’ve been using Scratch a lot but I never considered it a game, so I kind of like separated it [in my mind].  You know, gaming was here and like coding was here. But, when I look back at it, we often do what we call like Scratch challenges.  So they’ll have some sort of challenge that they’ll have to do in Scratch. We’ve basically taken Scratch and gamified it, I guess.

Students played various collaborative digital games, and Nick also strongly encouraged students to help each other figure out how to do things.

Although games were part of the STEM programme, there were many other non-game activities happening as well. These included robotics, makerspace activities, and having a functioning beehive in the classroom that allowed students to learn everything about bees, honey production, and so on.  Let's turn now to Sheridan, who works with older students, and has designed a whole programme entirely around digital games and gaming. Sheridan is an HOD of digital technology subjects at a boys’ high school. She came a from a previous professional career in IT. Like Jesse (a digital technology teacher we met in the previous blog) Sheridan literally laughed when asked if she was herself a gamer.

Gaming is not something I enjoy or am particularly good at [laughs]. When it comes to marking all these games they produce I am hopeless. I can’t even get onto platforms while the students just rock through it. But it’s OK – we deal with that. [Games are] what they’re interested in so I just go with it. (Sheridan)

The student-created games she referred to are created as part of a Level 1 NCEA digital  technologies class which Sheridan has re-oriented towards digital games over the last couple of years.  The motivation to do this was partly that many Māori and Pasifika students were not continuing from Level 1 into Level 2 and 3 digital technology courses.

I thought, I’ve got to change my level 1 programme to try to engage and retain these students… So I was thinking “how can I do that?”. The natural thing was gaming, because that’s what the boys thought they’d be doing in digital technology. So that’s what I’ve done and now the whole year is gaming.

The shift in the programme has also included a shift away from a focus on MS Office-based computing skills (e.g. developing skills in MS Word and Excel) and instead selecting achievement standards that suited a game design curriculum.

We changed all our standards – there are Level 1 Standards for using excel, word, [that we were previously using]. We decided that [as] we are a Google School… the students thought they already had the skills [and don’t use those MS Office programmes] so to say to them “We are going to do skills in Word and Excel”… ugh. So we changed all the standards we use to be more flexible and tie it to the gaming.


Over the course of the year, the students undertook research into digital games, including playing 1980s Commodore 64 games, through to looking at emerging fields like virtual reality and using Google Cardboard. They work through a storyboarding process, and designed game objects which they then created through 3D modelling and 3D printing. They then moved into building their games in a digital game-building platform, Gamefroot.

Then we write about [it]– that’s the part of it they’re not enjoying – they have to write about computer science concepts, but they do it about their game. The last step is making up a design product/packaging etc. as if they were to put it their game up on the App store, what would that look like, with description, screenshots, etc.

Like Nick, Sheridan was proactive in making connections with people from the game design and IT sector. This included establishing a working relationship with the makers of Gamefroot, contacting them after seeing a story about them in Interface magazine.

Sheridan thought the shift in focus in the Level 1 programme was working, as more of the targeted students were continuing on for levels 2 and 3, students seemed more engaged, and having everything linked to the digital games meant there was less “jumping around” in the course. A wider range of students was choosing to take digital technology subjects than had in the past.

Digital Tech was seen as a bum subject (in the past)…it’s gone from being students that have 40 percent attendance and didn’t engage at school, to now having students in my Level 3 class that are at the top of their game. We are catering to a broader spectrum.

Her department now offers three different digital technology courses at Level 3 to cater for the range of student capabilities and pathway interests. These include programming, which is the most difficult, digital technologies which is more about web-based IT, and computing, designed for preparing students who are not looking to go to university to be capable computer users.

Creating the conditions for students to become flexible digital problem-solvers

So what did Nick and Sheridan have in common regarding the integration of digital games in their programmes? Both expressed similar views on what they were trying to achieve in their programmes. It was not about the coding, or the game design skills per se. What they were aiming for were more generalizable and flexible digital capabilities.

Cos we’re not trying to create coders but we want the kids to be, like I guess the word would be, “digitally flexible”.  So that’s why you’ll notice like we have all different types of platforms here so, you know, Apple and PCs and different types so that they are not just on one [platform]. (Nick)

All I want them to get out of [the game design process] is to think. [About] the development of the game, the logic of how these things work….the problem-solving, “how do we make it do this or that?”. I couldn’t care less whether they walked away knowing how to code, or make a logo, or whatever. It’s the ability to solve problems. Because they’ll need to be able to solve problems, no matter what job they’ve got. If they pick up a few programming skills or a few design skills along the way, all well and good, but [for me] it’s all about thinking and problem-solving. (Sheridan)

While both teachers saw digital games and game design as a means to this end, Nick also noted that game design was also potentially a viable career pathway in itself.

We’re not trying to make video game producers but there is the possibility and it is a lucrative career, so if that’s what they choose, then so be it.  (Nick)

Nick, Sheridan, and other teachers we have interviewed in Games for learning explicitly thought about their students’ possible future pathways, including future employment. This led them to focus on the development of transferable capabilities in their students. They shaped their programmes in ways that they thought would best equip students to deal with whatever technology challenges they may encounter, and reached out to people in the STEM an IT sectors when they needed help, support, or advice. That’s got me wondering, could more teachers and students benefit from having connections with people in the game development, IT, and STEM sectors? Could this support students and teachers to explore new ways to work creatively and collaboratively with the technologies they can access within their schools, and to keep up to date with the nature of work in these fast-changing sectors? If so, how could these interconnections between sectors happen more easily?