Yasmin Kafai on what students learn from making games 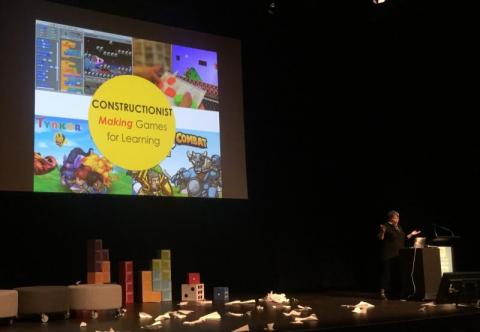 Day 2 of the Games for Learning conference kicked off with a focus on “digital learning and game design”. One of the highlights for me was Yasmin Kafai’s talk, “Connected gaming: What making video games can teach us about learning and literacy”. Here's the full video of Yasmin’s talk.

Yasmin has been researching what young people learn through making and creating for more than 25 years. She’s been involved in some fascinating projects over the years. I had the good fortune to hear Yasmin speak three times while she was in New Zealand, and each time I learned a little bit more about her interesting work.

In this post I’ll just pick out four big ideas that have stuck with me after hearing Yasmin, along with some personal reflections about why her work resonates so strongly for me.

(Note: Some of the quotes in this post are from the Q&A that happened after her talk, which unfortunately you won’t find on this video. I’ve also picked out a few bits and pieces from her recent books with Quinn Burke, Connected Gaming and Connected Code).

Yasmin’s mentor, the late Seymour Papert from MIT Medialab, differentiated between two different mindsets regarding the role of games for learning:

This distinction seems a very important thing for educators and game developers to understand, particularly as the “instructionist” mindset often seems to be the default position in the general conversation about games in education.  Yasmin says the constructionist view of gaming was quite a revolutionary idea over 25 years ago.

The idea that kids would programme their own games was something very controversial, because games were not well-regarded, especially not in the curriculum, and everyone thought it was impossible (Yasmin Kafai)

In the early 1990s, through the Project Headlight initiative, inner-city children in a Boston School  were able to engage in cross-curricular learning as they discovered how to design, code, and promote/advertise their own games designed to teach mathematics concepts to younger children. You can see what happened in the video that Yasmin shares. She later went on to undertake a meta-analysis of dozens of studies that have been undertaken to investigate what young people learn from making games. (You can find that study here).

This meta-analysis gave us some indication that making games for learning can actually be a rich learning activity. (Yasmin Kafai)

Idea 2: Children’s opportunities to learn through coding and programming (and making games) waned through the 1990s

With  the emergence of browsers and  increasingly easy-to-use software packages in the 1990s, the idea that everyone might need to learn how to programme began to fade away.

The reason computing languages like LOGO and Basic, Pascal were introduced in the 80s was that we believed that we needed to programme to interface with the machine. That all went away when the browser was introduced and you could point and click. People thought [programming] was obsolete, that it was just gone. (Yasmin Kafai)

My own school experiences in the 1980s and 1990s reflected the trends that Yasmin was talking about. My school exposure to coding began (and basically ended) with some very fun small-group learning, using Logo, in my last year of primary school. I vividly remember learning how to spell the word “forward” correctly, after the Logo turtle failed to move with our group’s misspelt command to move “foward”. (Full credit to the teacher who was working with us for not pointing out the spelling mistake, but coaching us through a careful review and debugging of our code so that we found and corrected the error ourselves).

By the time I hit high school, the few computing classes I took I didn’t involve any programming that I can remember. We were taught how to use various software packages, and if we did anything involving games, it was playing them, not creating them. I don’t think I learned any other form of code until years later, when I looked up on the Internet “how to write html” so I could make a website.

To tell you the truth, there probably were computer classes offered at my high school that included learning programming languages and concepts, but for whatever reason I didn’t pursue this subject further. Perhaps I’d already internalised some gender-biased ideas about computers and computer science?

This brings me to another aspect of Yasmin’s work that I think is really important: her research focus considers not only what young people learn from coding, programming, and making, but who participates in these activities, how they participate, and the implications for equity and social justice when opportunities to participate in digital learning aren’t equally available for all learners.

“...we are concerned with ensuring that computational participation does not become limited to a select few who can read and write the code that undergirds much of our digital life; instead, all should be able to engage in the multiple facets that comprise life in the digital public” (Kafai & Burke, 2017, p. 136)

I think this is one of the most important contributions that Yasmin has made through her work. It’s a point that could easily be lost in the rush to implement more digital technologies into school learning. Right now, there is a lot of messaging along the lines that students must urgently master new technologies, so that they are ready for the new waves of employment in increasingly high-tech industries. While it’s relevant to talk about educational value of learning about digital technologies in terms of access to future employment, this should not be the whole story of why and how we create the conditions that enable all learners to participate in the digital world in relevant and fulfilling ways.

I think it’s our job as educators to plan and enable learning not just as a means of future economic productivity, but as a means to greater ends that include building an equitable, sustainable, and socially just society. That’s not an easy ask. In fact, it’s much easier for education to replicate existing social norms and structures than to shift them. In fields like the tech sector, there are already clear imbalances in participation (and not only in terms of gender, but also in terms of ethnic/cultural and socio-economic backgrounds).  Educational systems could easily reinforce or even widen these gaps if we don’t actively interrogate why they have come about in the first place, and what can be done to address the imbalances.

Idea 4: Digital learning should be connected, rich, engaging, and provide networks for participation. Making games is one of the ways this can happen.

The recent resurgence of interest in children learning coding and programming in schools is often tied to the goal of developing “computational thinking”. However, Yasmin and Quinn Burke argue that:

Those who would like to return programming to the schools need to articulate an argument that extends beyond the common desire to make children more rigorous thinkers. Learning how to think is an admirable goal, but it is a limited conception of what programming affords young learners. (Kafai & Burke, 2014 p. 9)

During the Q&A, Yasmin cautioned educators not to lose sight of the importance of rich end-to-end processes - like creating and making their own digital games - as contexts for supporting digital learning and participation.

I’m concerned that we’re repeating the same mistakes we made 20 years ago, where kids had to do boring programming exercises that don’t amount to much. (Yasmin Kafai)

I think we can learn a lot from the work Yasmin and her colleagues have done looking at young people’s digital learning across a range of rich contexts. Making games is one of those rich contexts, but others include making and crafting with e-textiles, and even the emerging area of biological programming.

I think the 21st century will not be about computing, it will be about biology. We will not make, we will grow things... we will make synthetic biology, designing with biology, accessible. I see a close connection to coding....we now understand enough about cells function that we can move from working on electronic circuits, which is what we do when we programme... to what we call genetic circuits, to use cells to manufacture things for us. (Yasmin Kafai)

What do you think about these ideas? Watch the video, then leave us a comment to share your thoughts!