Scaling up Education Reform: Addressing the Politics of Disparity

What is school reform? What makes it sustainable? Who needs to be involved? How is scaling up achieved? This book is about the need for educational reforms that have built into them, from the outset, those elements that will see them sustained in the original sites and spread to others.

Using the Te Kotahitanga Project as a model the authors branch out from the project itself to seek to uncover how an educational reform can become both extendable and sustainable.

Their model can be applied to a variety of levels within education: classroom, school and system wide. It has seven elements that should be present in the reform initiative from the outset. These elements include establishing goals and a vision for reducing disparities; embedding a new pedagogy to depth in order to change the core of educational practice; developing new institutions and organisational structures to support in-class initiatives; developing leadership that is responsive, proactive and distributed; spreading the reform to include all teachers, parents, community members and external agencies; developing and using appropriate measures of performance as evidence for modifying core classroom and school practices; creating opportunities for all involved to take ownership of the reform in such a way that the original objectives of the reform are protected and sustained.

This book is an essential read for anyone who is involved in the process of trying to achieve sustainable school reform that addresses the question of how mainstream schools can effectively address the learning needs of students currently not well served by education.

The authors of this book are descended from a number of Mäori tribes in New Zealand. They are part of the growing ethnic revitalisation movement that has seen Mäori people seeking their own solutions to the ongoing social, economic, and political disparities that continue to plague Mäori people in Aotearoa New Zealand. This book focuses on their attempts to work within, and change, mainstream classrooms to include all children in the benefits that education has to offer.

Russell Bishop is the project leader of the large-scale theory-based education reform project Te Kotahitanga, currently running in fifty secondary schools. He is a professor of education at the University of Waikato.

Dominic O’Sullivan is a senior lecturer in political science at Charles Sturt University. Much of his work explores themes in the comparative politics of indigeneity.

Mere Berryman is the professional development director of Te Kotahitanga. As a researcher, she has collaborated extensively with classroom practitioners, communities and other professionals to bring about educational reform. She is the manager of the GSE Poutama Pounamu Education Research Centre in Tauranga.

“Scaling up Educational Reform is a refreshing and welcome alternative to today’s many discussions about improving student achievement or ‘turning schools around’.”

This title is available in e-book and kindle editions from mebooks.co.nz 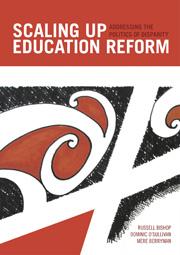