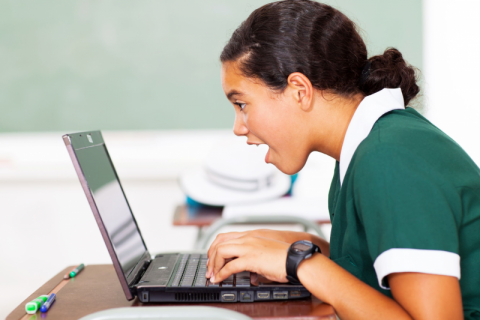 "I find gaming a great way to help my learning".

That’s something a New Zealand learner might casually remark in the near future, according to the Ministry of Education’s draft document illustrating a vision for education in 2025. So how realistic is this vision?

With the recent announcement that digital technologies are to be more explicitly a focus in The New Zealand Curriculum, it's timely to consider the future of digital games for learning from a research perspective. While there is plenty of research and theory  to support the idea that games can be good for learning, it’s fair to say that the research base around games for learning in New Zealand schools today is still relatively sparse. We’re trying to help fill that gap with our Games for Learning project, now in its second year.

If findings from NZCER’s survey of Secondary Schools in 2015 are any indication, the idea that playing games might be useful for learning might be quite revolutionary indeed. Rather than “games for learning”, the NZCER data suggests that some secondary school teachers currently see it as a case of “games or learning”.

Overall, games and gaming didn’t get a lot of airtime in the Secondary Schools in 2015 survey, so we can’t draw too many conclusions about the prevalence of games for learning (or otherwise) in NZ secondary schools based on this survey alone.  For example, in an open question about teachers' experiences of teaching and learning with digital technology, only 26 of the 930 teacher comments (less than three percent) even mentioned games or gaming.  What’s interesting to me is that  most of those comments – 21 out of 26 – position games squarely in opposition to learning.  They are described as “time-wasters”, “distractions”, and something teachers must work very hard to “monitor” and “prevent” and “police”. Here are some typical examples:

Students do not grasp the idea of using devices for learning. Used for socialising and gaming. This interferes with the learning.

Students playing games instead of doing their work is a major issue.

Students always get more distracted on devices with things such as Facebook/YouTube/games.

Students have to be monitored, not to go on Facebook, or load games.

Students know how to use digital technology for games – not so good at using it as a learning tool.

Reading between the lines, it might be reasonable to assume the games these teachers are trying to keep out of the classroom (despite students’ best efforts!) are of the non-educational variety. But what about games that are designed – or easily repurposed – for learning? Are they being used in secondary schools to support student learning? Perhaps, but the data suggests this isn’t particularly common. Only 8 percent of secondary teachers surveyed said their students “often” play games or simulations as part of their classroom learning, although a further 22 percent say this happens “sometimes”. (A further 6 percent of teachers said they don't currently, but "would like to").

The use of digital games or simulations at least some of the time, reported by a combined total of 30 percent of teachers,  still pales in comparison to other common uses of digital technology for learning, such as to research using the internet (93 percent often or sometimes), or to compose, edit, and format written work (83 percent often or sometimes). Unfortunately, we don’t have other data from the national survey to identify what kinds of games or simulations are used, how they are used, and why they are used in some secondary classrooms. (Next year we will have data from NZCER’s national survey of primary and intermediate schools, so it will be interesting to see whether games for learning have a different profile in the Years 1-8 school curriculum).

We can speculate on all sorts of reasons why using games and simulations for learning may happen infrequently in today’s secondary classrooms: Perhaps there just aren’t that many good games for learning out there. Maybe they are out there, but they aren’t easy for learners and teachers to find when they need them. Maybe teachers aren’t confident to bring game-based learning into their classrooms because they aren’t interested in games or gaming themselves. Perhaps they simply don’t have time to explore the learning potential of games amongst other pressures on their time.  Or maybe teachers aren't convinced that games are proven in terms of their value for learning, compared with other teaching approaches and strategies they already use. I suspect all of these things are probably true, and it is useful to note that 28 percent of teachers’ comments abut learning with digital technologies identified a need for teacher professional learning and development (PLD), and more time, to enable them to embed the use of digital technology in their teaching practice. But I’m also interested in the idea that there may be a deep underlying stigma associated with games and gaming that seems to manifest itself as a form of binary thinking, whereby games are in some way symbolic of what “not learning” looks like.  Is this view fair? Or could this view limit  teachers from seeing the unrealised educational potential of games?

We’ll be exploring these idea further in future posts. In the meantime, feel free to post your comments below!

There is enormous power in

There is enormous power in games and gamification, but I fear the crowded curriculum and obsession with assessment at Years 11 to 13 makes it very difficult for teachers to fit them in. I think you are right about the time element. There is so much out there, that it is difficult to know what to use, and how to use it for learning. Minecraft and Civilisation are both existing computer games with great lessons, but the teachers would need to be familiar with them, and be able to link in with learning. I think non-electronic games, such as table-top and card games have great potential too, particularly with regard to the Key Competencies.

Thanks Nic. Yes, I'm very interested in how game-using teachers think about and use games - all kinds of games (and the related notion of gamification)- and how the use of games in the classroom connects with the intentions of the curriculum. We'll be writing more about what we're finding through the Games for Learning project over the next couple of months. The use of diverse games, and goals around developing key competencies, are already coming through as quite clear themes!

Kia ora, I've used games like Kahoot very successfully by getting the students to create the content through an agile design cycle. They learned- researched- as they devised the quiz by having to collate content and turn into questions. Then by playing each other's quizzes they were able to reflect and improve on their product as well as learn from what each group had done. It depends on where along the SAMR continuum the game/ gaming activity is, and as you pointed out, how confident each teacher is able to implement it that determines the value-added component of using digital tech games for learning.

There's the old adage that

There's the old adage that the best way to learn something is to teach it - sounds like this could well apply to your students' use of Kahoot. When you make a game (or a quizz) you are designing an experience for someone else, which means you have to think about things from the learner (or player) point of view. I think that in itself is a good opportunity to learn. Testing out your design on other people is a really important part of that process too. I'm very interested in how game-using teachers value learners taking on the thinking and problem-solving that is involved in game design, and how they integrate this with additional curriculum goals.

Interestingly, I gave my

Interestingly, I gave my students several ways to evidence their learning and creating a Kahoot was one of them. Not all chose to do this, although most did, as some created role plays or used other types ed tech. For me it's another way to differentiate learning to allow learners to construct learning in a way that suits them best while using 21st century learning skills. Fun to assess, though!

Educators are far too quick

Educators are far too quick to dismiss the power of video games. Its almost like we feel we are in competition with them? I think gamification has the potential to drive massive engagement in education but as soon as teachers hear the word game they shut up shop. That is really sad. There is so much we can learn and take from video games, even more from the people charged with designing those games. If teachers / educators just took the time to come to understand exactly what "gamification" means, we will be taking a step in the right direction.

I think gamification has huge

I think gamification has huge potential but is often limited by the mind set of teachers who are pressured by an overly full, rigid curriculum and assessment schedule. I have moved from teaching in a secondary school environment to a primary school environment this year and have been delighted with the flexibility of the timetable to be able to implement gamification with a little more freedom. The motivation levels have increased and students are highly engaged - to the point the are choosing to start their learning before the bell! This has sold me on the benefits of this learning model and I hope to take this back into the secondary environment next year. For students to fully engage in the curriculum we need to think creatively and flexibly about it's implementation, gamification of the curriculum is one way this can be done.