Pathways, labour market experiences, and learning at work and beyond at age 26 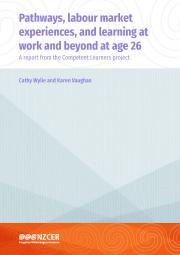 The Competent Learners study has followed a cohort of young New Zealanders' development from when they were in early childhood education, through school and into adulthood. Over the years, its findings have been well used in policy and practice. The final phase of the project returned to the cohort when they were 26. Two reports from this phase are now available, with a third report coming in late 2019.

This report describes the learning and labour market experiences of 274 young adults at age 26, and the paths they took into adulthood. These young adults were part of the Competent Learners cohort study, which has followed a group from the Wellington region since near age 5. The study’s focus was on how children’s and then young people’s experiences in and out of formal education contribute to their educational performance, and also their wellbeing.

The Competent Learners cohort typically had “well lit” paths (Patterson, 2011) to traverse in their journey from school into adulthood. The average income and qualification levels of the families in this Wellington region group were higher than the country as a whole. Most left school with at least NCEA Level 2. So how this group fared in their journey from school can tell us what that journey can look like for those for whom, in theory, it should be the most straightforward.

Pathways from school for most of the Competent Learners cohort to age 26 usually included continuing formal learning, often combined with work. Those who went from school to employment usually stayed in full-time work, though some added formal study by age 26. Those who took gap time before the age of 20 were least likely to return to formal study after age 20. Gap time after the age of 20 was common (42%), mainly to travel, but also to work: a third of the group had worked overseas by the time they were 26. A quarter who took gap time said it changed their minds about what they wanted in life.

A fifth of the cohort were studying at age 26, primarily for work or a career they could not get without (additional) qualifications, or to widen their options.