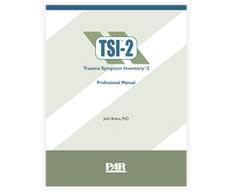 New in this Edition

Introduced in this edition are three new scales:

The four TSI-2 summary factors are either new to this version or have been reconfigured based on newly added or modified scales.

New items were introduced to the TSI-2 validity scales in order to assess a client’s tendencies to deny symptoms that are commonly endorsed, to overendorse unusual or bizarre symptoms, or to respond in an inconsistent or random manner. The Atypical Response validity scale was redesigned to assess not only overreporting in general, but also potential misrepresentation of PTSD.

This unlimited-use software scores and profiles the TSI-2 and TSI-2-A after the client’s responses are entered by the clinician. It will generate a score report and graphic profile of the client’s results, indicating the relative extent to which the respondent is experiencing posttraumatic stress or other sequelae of traumatic events. A change score report for both the TSI-2 and TSI-2-A assists clinicians in determining whether significant change over time has occurred.