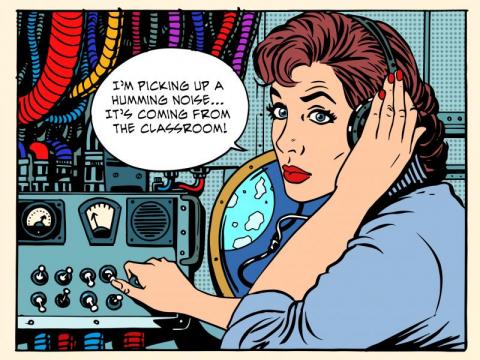 Some of the Games for learning teachers could be described as “enthusiastic explorers”. Like the play-based learning advocates, they may not be experts on games and gaming, but that doesn’t stop them from encouraging and supporting their students to dive into games and game design in the classroom.  In today’s post, we’ll meet Diana-Grace, who teaches Year 7 and 8, and Jesse, who teaches design at a secondary school.

Our team knew Diana-Grace prior to the Games for learning project, and we knew she enjoyed pushing the edges of her thinking and trying new things in her teaching. Her journey through games and game design with her Year 7 and 8 students in 2015 and 2016 began somewhat unexpectedly, then grew like a snowball, gaining momentum and propelling herself and her students deeply into gaming and game creation territory.  It began with the fortuitous introduction of traditional games by an RTLB (resource teacher: learning behaviour), who came in every Monday for a whole term to help develop students’ social, collaborative, and learning-readiness at the beginning of the school year.

We did a whole thing on social skills and we did a lot of traditional games, netball, marbles and pulled out all the old school stuff and some of the newer board games and it was really successful … I thought we are onto a winner here … (Diana-Grace)

The successful use of traditional games in the classroom during Term 1 led to an exploration of digital games in Term 2.

In term two I thought “OK so how am I going to up [the ante on] this?”. So then I introduced [a digital game], cause I knew that [the students] liked playing online games. (Diana-Grace)

This foray into digital games coincided with some of Diana-Grace’s other key goals in her role as a teacher and assistant principal. These included developing the school’s capabilities around using BYOD (bring your own devices) for learning, and helping to develop young people’s capabilities as digital citizens.  The Monday morning gaming timeslot that had been used for the traditional games in Term 1 became devoted to digital multiplayer games in Term 2. Diana-Grace was seeking to strengthen students’ social and collaborative skills through gaming, and get them using the digital tools available in the classroom to think, write, and reflect on their game playing.

Diana-Grace and her students found and introduced various digital multiplayer games into the classroom, games like Agar.io and Space Team. After playing these games, the students had to think, discuss, and write about their gaming, critically appraise different games, and so on, sharing their work digitally using collaborative slideshow tools in Google classroom.

I actually made it compulsory… [Showing the students that] I am going to take this seriously enough that you will go out to morning tea today as I read through the slides to see that you have contributed a thought about this game.

The capacities that she was aiming to develop in students through their game-based learning and BYOD learning included “respect, responsibility, resilience, resourcefulness”, and other ideas connected with the school’s focus on PB4L (positive behaviour for learning). A further concept she wanted to work on was empathy, and this was something she encouraged students to look for in the games they were playing and reviewing.

[Students] would all write some kind of reflection, “what if?”, “I wonder..”, “I like” about[the game],  and what does respect or responsible, what does the PB4L look and feel like in the game and is there any example of empathy [in the game]?

She was thinking about how students’ understanding and expression of empathy could be developed through gaming and game design.

We did some work around the difference between sympathy and empathy and you know is it actually possible to create a game where being in another person’s shoes is part of being a success of this game? What we have done is to build up to being in a place to do a …game design challenge….

Though not all the students in the class were into digital games, some were very excited and motivated to tinker with coding and game-creation.

I would say easily three quarters of the class are totally into it and can’t get enough time to do this adventure challenge. And so they are negotiating extra time with me… they want to do it, they are checking each other’s out, once they are completed they are putting them in to [the class online studio] which was have sitting in our blog.

From these early and exploratory first steps into digital game design, Diana-Grace’s class went deeply into game design and stayed there well into 2016. We hope to revisit Diana-Grace later this year to look at where she and her students have taken their game design interests, and what they have learned along the way. For a preview, you can read this article and this article discussing the class's involvement in NZTA's student game design competition.

Jesse teaches digital design at a secondary school, but he definitely wouldn’t describe himself as a gamer. In fact, when we asked him about his own gaming background, he laughed and said that he tries to stay off the computer as much as possible outside work hours.

I am actually an old fashioned person, between a kindle and book I would choose a book. I would like to hear the turning pages, touch them. Feel the paper and smell the ink…I am a graphic designer so I can literally tell you what kind of paper this is -  acid free, 120 grams -  so yeah I don’t really play games much. [If] there was a game I played it is because I wanted to show it to [the students].

Although digital games aren’t his personal passion, Jesse actively encourages his students to both play and make digital games in the classroom. He is relaxed about what kinds of games students play. He sees this as a relevant part of the design process, and it also provides a way for him to see what students know about, and like, in games.

The reason [I let them play all kinds of games] is I get to see what they like and dislike in games, what colours they favour in the game, what kind of look and feel, [what kind of games], is it just a shooting game or is it a thinking game? From that, I can glean their prior learning, prior knowledge or basically their engagement [with games].

So why is Jesse, a non-gamer, so supportive of his students’ engagement with digital games? Jesse thinks games and gaming have to be part of learning, because they have become “part of the culture, youth culture”. Conversations about games and gaming were, therefore, part of his classroom culture. He encouraged students to think, talk, and analyse games, and to think about themselves as creators, not just consumers of games.

I always tell them don’t just be a gamer, be a game maker….

Like as an example before you cross the street what do you do, do you just cross it right away? [Therefore what would you have a player do in a game about crossing the road?] That is about as far as analysis I can go because I am not a programmer myself,   I am more of a designer, more like a graphical user interface (GUI) designer. I haven’t gone in depth in terms of coding but I am surprised every now and then that [some of my students] are actually now being able to do some code.

Jesse gave his students the freedom to develop their game-building skills with easily available tools.

The game [making] things that are happening in my classroom consist of scratch or visual programming games, where they can do it by themselves rather than [being] teacher-driven.

Jesse was clearly very comfortable with students sharing their expertise in games, particularly when they knew things that he didn’t know.

There are things the students know more than I [do] … whenever I gave them the chance they are more engaged in learning, when they see that “alright I have taught my teacher to do this”.

Giving learners opportunities to show and share what they knew was something that Jesse thought paid off in terms of creating a more collaborative learning environment.

Most students when they are, when they hit a road block or an obstacle the first port of call is not a teacher anymore, they ask their mates, hey can you help me over here and that, for me, is a good thing.

What can we learn from these "enthusiastic explorer" teachers?

One clear theme across Diana-Grace and Jesse's stories was the extent to which they seemed to view their own lack of gaming knowledge and expertise as a benefit in the classroom, rather than a disadvantage. Diana-Grace mused on this when reviewing this blog post in draft, commenting:

Actually its very important for me - not to be an expert [on games and gaming]. Too many conversations might close down. If I was an 'expert', I would have pretended I wasn't! (Diana-Grace)

Both teachers comfortably inhabited their roles as the non-game-experts in the classroom, practically underscoring this with students by opening up many opportunities for students  to be the experts and to share their expertise with peers and their teachers. For example, Jesse actively encouraged students to take turns being "the teacher".

But even as they acknowledged and even played up their own non-expert status regarding games or coding, neither teacher approached their practice naively. Both had very clear purposes for fostering and encouraging students' engagement with games and game design, including the development of deeper lifelong learning capabilities, and encouraging students to think about themselves as creators rather than simply consumers of digital games. It was this larger purpose that enabled both teachers to be fluid about exactly how to get there.

Not all teachers may be as comfortable as Jesse and Diana-Grace were to embark on a journey into games and game design without a clear roadmap (hence our designation of them as enthusiastic explorers), but I think their experiences are useful to share with  other novice game-curious teachers. If that's you, and you're feeling inspired, you might want to also read this previous post full of advice from game-using teachers.